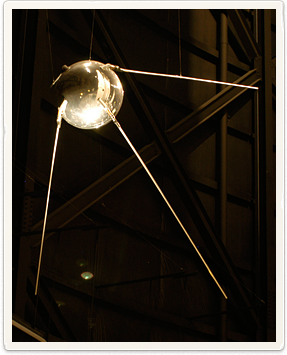 In 1957, the USSR launched the world's first artificial satellite into space and gained the upper hand over the USA. The technology behind it, which had its origins in the rockets captured from the Nazis at the end of World War II, could now be used to power space travel.

US President Eisenhower responded by establishing the US space agency NASA; now both East and West were locked in a struggle to gain supremacy in the 'space race', which consumed vast sums of money by both sides.

On 12 April 1961, Soviet astronaut Yuri Gagarin became the first man in space when he orbited the earth in a spacecraft. This was followed by the US landing the first man on the moon in July 1969.

It was not until the 1985 that Gorbachev, the new Russian president, realised the futility of developing ever more advanced space technology and weapons. He instigated two important meetings with the US in 1986 and 1987 to reach agreement on ending the Arms Race, but money continued to be spent on space technology. 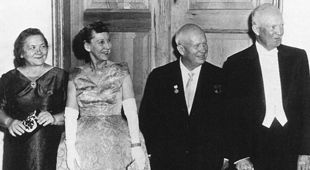 Dwight Eisenhower Nikita Khrushchev and their wives at state dinner 1959 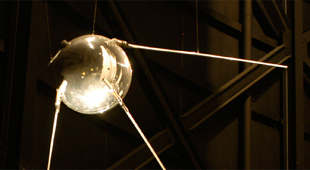 Sputnik, Soviet entry in a scientific race to launch the first satellite ever

Frederick Forsyth - What was the significance of the space race?