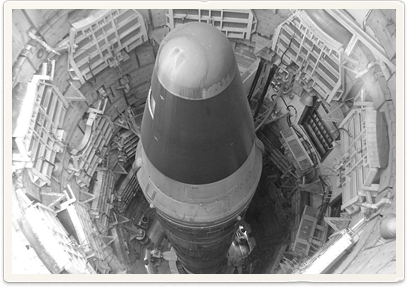 World War II saw the development of weapons with more destructive power than ever before, i.e. the V1s and V2s. The first atomic bomb was dropped on Hiroshima on 6 August 1945 and demonstrated the terrible destructive possibilities of new technology. It was no longer about armies fighting each other, but increasingly devastating nuclear bombs.

The USSR and USA competed to create ever more deadly weapons, in order to be the 'greatest' superpower. By 1946, they began to increase their stock of weapons and talked of war. Once both sides had nuclear weapons, rapid retaliation was the only defence. This led to the policy of MAD (Mutually Assured Destruction). At points of heightened tension in the Cold War, it was hoped that neither side would launch its nuclear weapons because of MAD. Nonetheless, both continued to spend vast amounts of money on developing weapons.

Gorbachev realised in the 1980s that military expenditure was crippling the Soviet economy. He sought to improve living standards for ordinary Russians by limiting weapon development.

Major agreements later put an end to the Arms Race, with the Intermediate Nuclear Forces Treaty (INF) in 1987, and the Strategic Arms Limitation talks in 1991.